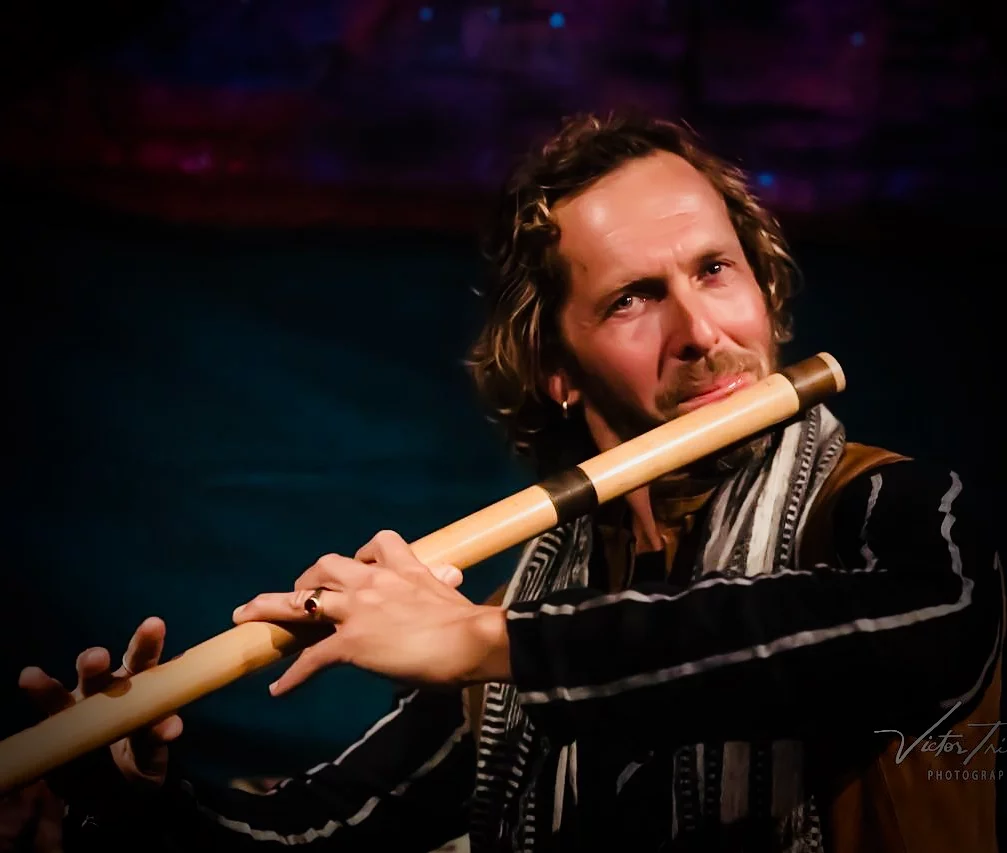 Bansuri is one of the most simple instruments in structure yet has endless musical possibilities. As well as Indian music the Bansuri can be used in almost any genre. Bansuri is a highly portable instrument and perfect for playing alone as well as in groups.

Bansuri is taught by Jason Kalidas (from Varanasi Gharana) in North Indian music methodology and can be taken at any level including complete beginners.

For absolute beginners in music, the Indian system is a more natural and clear way to learn. In comparison to western music, Indian music begins from the very basics of sound and works up, giving minimal theory until necessary.

Made from a single length of strong Bamboo, Bansuri’s are very simple in structure but are capable of reaching the height of musical expression and virtuosity. With a sound like a call to the divine, the Bansuri’s tone brings so much joy to listeners and players alike that even just one continuous note is delightful to hear.

Bansuri is a very rewarding instrument to play if you are willing to spend the time practising. It is a highly sort-after instrument and listeners are always delighted to get to hear its evocative tones.

Bansuri is a wonderful aid to stillness and meditation, even if one doesn’t wish to perform at all, it brings so much peace and stillness to just play alone or share the sound with friends.

History of Bansuri as an Instrument

The Bansuri is a transverse flute made from a single hollow shaft of bamboo with six finger holes. The Bansuri is an ancient musical instrument associated with cowherds and the divine love story of Sri Krishna and Sri Radha.

The Bansuri is Lord Krishna’s divine instrument and is esoterically associated with spiritual awakening or the call of God to his devotees. Stories depict Krishna’s Bansuri having an enchanting effect not only on the women of the Vrindavan, but even on the animals of the region.

Bansuri is one the finest instruments to express the emotional subtleties of Indian Raagas, the pure and rich tones of Bansuri are like a continuous prayer having the capacity to deeply soothe and open the hearts of listener and player alike.

The North Indian Bansuri, typically about 14 inches in length, was traditionally used as a soprano instrument in folk. Classical music is the daughter of folk music (in all traditions!). The Bansuris movement into Indian classical music was relatively recent, Pt. Pannalal Ghosh (1911–1960) pioneered the low-pitched versions of Bansuri and brought the instrument from a folk instrument to the stage of serious classical music. The Bansuri has since been further elevated by the globally renowned brilliance of Pt. Hariprasad Chaurasia. Bansuri has been an indispensable part of Hindustani Classical music for well over half a century.

Bansuri comes from the Sanskrit- bans [bamboo] + swar [musical note]. Bansuris are transverse flutes that enable the superior control, variations and embellishments, needed for Indian classical music and range in size from less than 12″ to nearly 40″.

Making Bansuri flutes is a fine art. The bamboo suitable for making a Bansuri needs to possess many qualities. It must be thin-walled and straight with a uniform circular cross-section. Bansuris must be clear of nodes so the Bamboo selected needs long spaces between nodes. Being a natural material, it is difficult to find bamboo shafts with all these characteristics, which in turn makes good bansuris rare and expensive. Suitable species of bamboo (such as Pseudostachyum) with these traits are endemic to the forests of Assam and Kerala.